Texas had an abnormally cold winter this year... don't believe me? Check out my dogs playing in the snow! 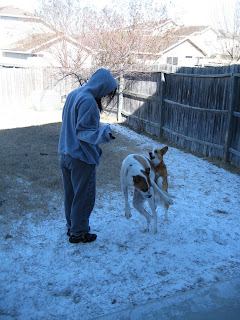 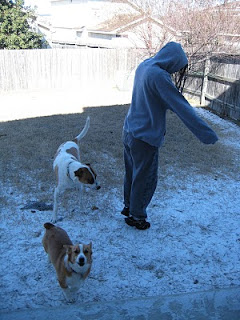 Back in January, in the midst of the cold weather, I decided to throw a Pho Party to make sure everyone got through winter with no signs of frost bite.

Since we were inviting a lot of people (20 people showed up), I had to make sure I had enough broth to feed everybody. So what does one use to make a bigazz batch of pho? A turkey fryer, of course! We actually have an electrical fryer leftover from Micah's old brewing rig - RECYCLE, REUSE. The fryer is actually perfect for making pho because the digital temperature gauge can be kept at just the right temperature so where the broth doesn't actually boil (that's a no-no). The fryer also has a basket that I can put all the bones and veggies in, makes clean-up a breeze. The fryer made about 4.5 gallons of broth - the bones, veggies, and basket displaced the water to the top of the pot. 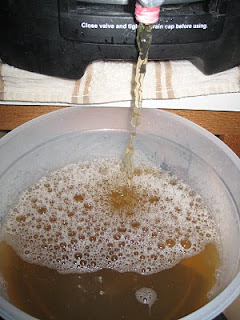 Since most people aren't going to make enough broth to feed two dozen hungry eaters, the following pho recipe is good for a 12quart pot. Every Viet family has their own pho recipe but this is how my mom's been making her pho for decades and everyone seems to love it!
Ingredients:
Directions:

1. Put the beef bones in the pot, fill with water, and a tablespoon of kosher salt. Bring the pot to a boil and let it boil for 10 minutes. This is how you get rid of the "impurities" from the bones. Don't be scared by the weird smell and the greenish tinge! After the 10 minutes, dump all the hot liquid out, wash the bones under cold water and make sure the pot is cleaned as well. Put the bones back in and fill with enough water to cover the bones. Put it back on the stove and bring the pot to a simmer. 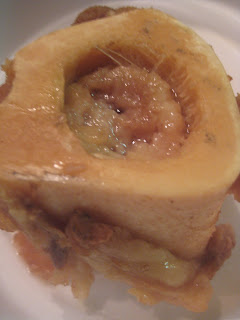 While the bones are boiling the first time, you can get the following done: 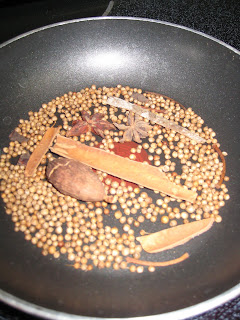 {toasting spices, this pic shows a smaller portion of the spices}

3. On a grill or on a hot skillet, char the (2) onions and the ginger. You can a black char on all everything. Once the onions and ginger are charred, let them cool slightly before you remove the charred bits. You can run it quickly under water, but I don't suggest doing that too much since it also takes away from the flavor.

4. Once you have the bones cleaned and on it's second simmer, throw in the spice bag, charred onions/ginger, daikon, rock sugar, and about 3 heaping tablespoons of kosher salt.

5. If you're using the brisket, you can add it now as well. Take the brisket out after 1 hour of simmering in the broth.

**Note: It is of utmost importance that the full pot never comes to a boil, it should stay at a simmer, otherwise the broth will become cloudy. 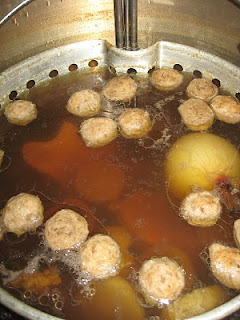 {pot of pho with onion, daikon, and meatballs}

6. Simmer for at least 2 hours - the longer the better. Continue to season with salt until you get it the way you like it.

7. 15 minutes before serving, add a 1/4 cup of fish sauce to the pot. You might have to adjust the fish sauce amount to your liking. If you're using the meatballs, this is the time to add the meatballs.

8. Now is the time to prep the meats that go on top of the noodles:
-The cooked brisket should be cut against the grain, about 1/8 inch thick.
-Before cutting the raw eye of round, I throw it into the freezer for 15 minutes so it's easier to cut into thin slices. Get your sharpest knife out to make sure the cuts are SUPER THIN.

9. Cook the noodles. If you're using the fresh noodles, it only takes 30 seconds in boiling water.

10. Making the Bowls: Place the noodles into a large bowl, place a couple of slices of the brisket and the raw eye of round on top of the noodles. Ladle the broth to fill the bowl - the hot broth cooks the eye of round. Top with meatballs and the garnishes that you so wish.

11. Sliced onions, green onions, and cilantro are usually placed in the bowl immediately after the broth is ladled on top of the noodles - but you can leave it on the table if your guests are picky about their garnishes. The other garnishes usually sit at the table. 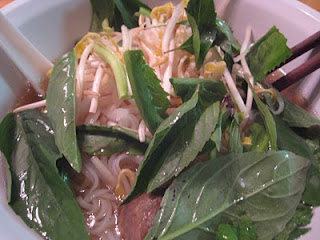 12. Squirt a smattering of hoisin and sriracha into the bowl, stick a chopstick in it with a large soup spoon and DIG IN! 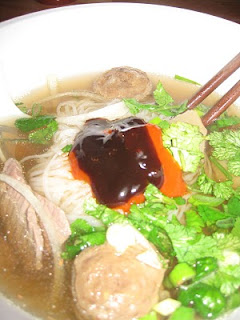 {just a smattering of hoisin and sriracha} 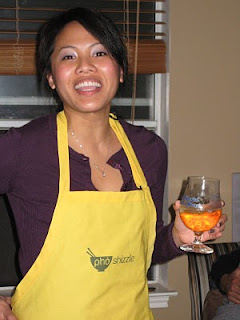 {Linda rocking the apron Micah got her} 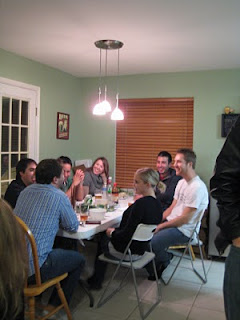