Now that we're in our fourth year, I think we've got this slip-n-slide party thing down. 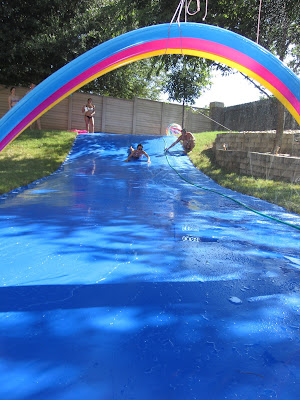 The week before the party, Micah and I spent 45 minutes repairing any tears in the main slide and re-taping/re-grommeting any grommet areas that came loose (info on how we originally added the grommets here). Thankfully there were only a couple of small tears and grommets that needed replacing -- which means our grommet experience from last year passed with flying colors.

Since we had the same layers going down as last year, this year it took less than one hour to put up the entire slide. Shout-out to my family and friends who helped us set-up! You guys rock!

Micah had the genius idea of doing a time lapse of the day. With a little engineering and duct tape, Micah secured his phone to the grill and this was the outcome:

I did, however, add tacos to the menu. I needed something I could make in big batches and would keep well in crock pots. I ended up making 6 pounds of green chile chicken tacos and 8 pounds of pork tinga tacos. Both are from Rick Bayless' Mexican Everyday cookbook.

What I did the day before the party:

Since I had most of the food prep done, on the morning of the party all I had to do was pick up fresh tortillas and corn chips from the local tortilleria shop (on Rundberg, of course).

My sister helped with making the delicious guacamole (I bought 20 avocadoes for it) and the queso.

A few hours before the party, I did cook the chicken and have it ready for the heating plate. Once the party started, I combined the chicken with the rest of the ingredients and everything was ready. I put all the pork tinga into a crock pot and voila!

All the food I made fed nearly 40 people, with pork tinga left to spare!

Micah made three beers for the party: IPA, saison and a orange berlinerweisse. There was something for everyone!

Between the noshing, there was some sliding!

Since we love a good game, we decided to add flippy cup to the mix. In actuality, we just want friends to stop posting this video to our FB pages. Slip and Flip was the perfect addition to the party!

I would say this year's party is the best one yet! We even had folks from Cali fly in JUST FOR THIS PARTY. It's that legit.

And no party would be complete without a montage of the day. Enjoy.

**Editor's note: "Drip Drop" is one of my favorite songs off the Empire 1st season soundtrack. Get it.


1. Put all the ingredients into a pot and fill with water.
2. Heat until boiling and then lower to a simmer for 5 minutes.
3. Remove all the solids and place into a blender.
4. Add a bunch of cilantro and juice of one lime.
5. Blend together. Season with salt and more lime if needed.