What does Dogfish Head brews, comedians, films, and food all have in common? Well, in Austin, it turns into the Off-Centered Film Fest!

For the past five years, Dogfish Head has teamed up with the Alamo Drafthouse for this fest (I really think it's because founder of Dogfish Head, Sam Calagione, really likes any excuse to be in Austin!).

While the festival is mainly about the short films and competition, beer and food plays big parts as well.

When an e-mail came into my inbox to attend a beer and cheese event, it took me 2.5 seconds to forward it to Micah with the following text "Don't you want to meet him up close and personal!?" 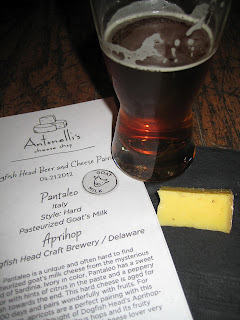 {cheese, it's not just friends with wine}

On a balmy Saturday afternoon, Micah and I got a chance to go to a beer and cheese tasting at the Highball. Dogfish Head brews were paired with some delicious cheese from Antonelli's Cheese Shop (this biz is everywhere! Anytime you see a beer/cheese pairing event in ATX, it's with Antonelli Cheese). 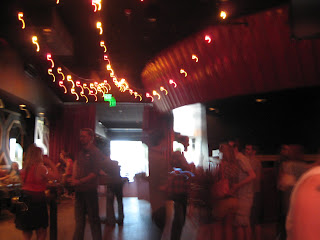 {blurry picture of the Highball, I'm the worst at taking pics}

While Sam (the brewer) was still doing interviews, we got started with the first beer/cheese pairing: Namaste (witbier with tons of citrus notes) + Cana de Oveja cheese (soft-ripened sheep's milk cheese). I really love wit beers so this one was my favorite. Micah thinks the Namaste beer is priced too high in the stores, so we don't actually buy it very often. I really liked the lemongrass notes in the beer and it paired beautifully with the soft cheese. 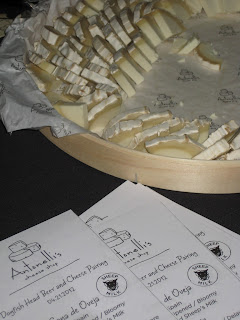 The second pairing: Aprihop + Pantaleo cheese (hard, goat's milk). This cheese was the one that everybody loves! It went fast. If you don't like apricots, you probably won't like Aprihop, thankfully, I like apricots. The sweetness combined with the hoppiness was nice to cut the fatty cheese. 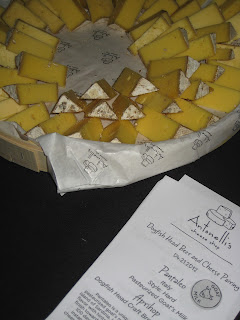 Third pairing: 75 Minute IPA + Appalachian (semi-soft cow's milk cheese from Virginia). I'm not a huge fan of IPA's but I can drink a lot more of it when it's paired with delicious cheese! While the cheese was good, I think an even bigger more pungent cheese would have been even tastier! 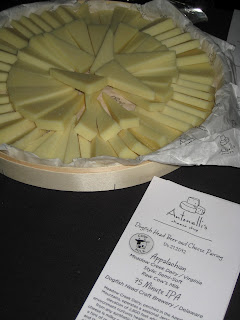 While we were enjoying our third tasting, Sam Calagione showed up to hep serve his goods and mingle around the room. We've seen Sam before at GABF, but those events are huge and it's hard to get to talk to him when he's surrounded by hundreds... thousands of beer NERDS! Since this was a much more intimate setting (max 60 people), we got to take a pic with him and talked to him about the now defunct show, Brew Masters. He said he really enjoyed filming the show, but a BIG beer advertiser on Discovery was not happy about the show so they decided to cancel it. That's his account of what happened anyway. 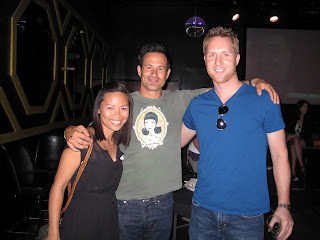 I also asked him what his favorite Austin breweries are. He said he was friends with the (512) guys, so he liked their beers as well as Live Oak -- he has good taste!


Me: Sam is so nice.
Micah: Yeah, he sure likes to hug. I wonder if he works out? He was kind of buff.
Me: Um. Yeah? Also, he doesn't have a beard like most brewers.
*or something along those lines*

While we were enjoying the beer, Micah pointed to a guy he thought was one of the guys from Stella. Since I knew it wasn't Michael Ian Black, I wasn't interested. Kidding. It was actually the non-Michael of the group, David Wain. He was sitting with a group of folks from Alamo Drafthouse -- I'm sure talking about movie thangs. 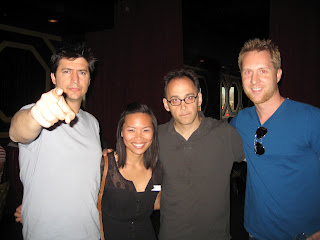 Anywho, we grabbed him and mentioned how much Micah loves Stella, he said "thanks," we got a picture and moved on. Oh yeah! We also took the picture with Ken Marino. He looks familiar, yes? He's been in Role Models, Reno 911, and tons of other movies here and there. IMDB that shiz, I can't type it all here.

When we left the party, we both commented on how much fun it was and how random it is that Sam Calagione is friends with these actors? How did those friendships come to be? Was he a fan of their stuff or were they a fan of his beers? Who can say?! But I appreciate that they were all in one room this Saturday afternoon. Too bad Michael Ian Black wasn't there.