Nicer tap rooms are in order!

While I was sitting at Odell Brewing in Ft. Collins, CO last December, I had an epiphany when it came to tap rooms: Texas breweries don't have nice tap rooms because they can't sell beer on-site.

I don't know why it took me so long to realize that our tap rooms are 10x lamer than other states! I mean, yes, there are nice ones like St. Arnold's in Houston, but that's few and far between folks.

Most young breweries have a warehouse, a couple of taps in the wall and a bar table to serve it from. It's functional, but it sure isn't pretty.

BUT! With the slate of beer bills close to becoming reality, nicer tap rooms might be in our future! I think if breweries are allowed to charge for samples, pints, etc. they'll put more money into a useable space! I can't wait to see what the breweries come up with!

On Friday afternoon, the Texas House used voice votes to approve the bills. A final House vote on Monday will push the bills to Gov. Rick Perry's desk. There's currently no real opposition, so this is fo'realz people!

I've been keeping up with these bills for awhile, you can read past articles
here
here
here
and here.

Here are my favorite tap rooms (places that actually have rooms, not just an open warehouse) in Texas right now (in no particular order):

1. Hops and Grain: It's a small room but it is a good space. The room has a/c, seating and a view of the brewery. My favorite thing about this place? Plenty of toilets! Because it's in a shared warehouse, there's a communal bathroom that is HUGE.

2. St. Arnold Brewing Co.: It's a grand beer hall. I remember when they used to have that warehouse on Hwy 290... the good ol' days. The new location has a huge beer hall with plenty of taps. There's usually a line to get in but it's a good deal! Even though there are at least a dozen picnic tables, you might have to sit on the floor if it's really busy, which is only a minor inconvenience.

3. Deep Ellum Brewing Co.: The open-air space below the pergola is lovely! You get your beer inside the warehouse, but there's a nice seating area in the front of the business. There are several picnic tables and wine barrels turned into tables. Bring a lawn chair just in case!

4. Jester King Brewery: Fairly large ranch-style tap room. No seating area inside the room but plenty of space outside!

5. Tie between Ranger Creek Brewing & Distilling and Branchline Brewery:
Not much seating in either place but it's a good spot to hang out if it's 100 degrees outside. I might give RC an extra point because they have cool artwork on the walls.
Posted by Calily at 5/17/2013 09:10:00 PM No comments:

It's been one year since I've had my little garden growing in the backyard! Remember when I told you how Micah and his parents got me a raised bed as my 30th Birthday gift? It's a milestone because I've actually kept up with the gardening and have grown some decent stuff over the past 12 months.

Obviously last summer's okra was a big hit and they lasted well into early fall -- I am growing okra again this year (obvious). In the fall, I removed the summer plants and put in broccoli, kale, cabbage, spinach and green onions. The broccoli seeds never took, but the kale, spinach and green onions did really well. The cabbage heads grew, but they were itty bitty -- probably the size of a medium-sized grapefruit (definitely not like the ginormous ones you see in the regular grocery stores).

Back in March, I went to a garden sale hosted by Sunshine Community Gardens. They had a slew of tomato plants so I picked up a couple of Cherokee tomatoes, a hybrid one, a cherry tomato plant, and an heirloom one. I planted them in early March and sure enough, there was a slight freeze in early April! Amazingly enough, my plants all made it through the freeze with no issues! I didn't even put a tarp over them.

I bought so many tomatoes thinking "surely one or two will die, especially with my luck." But fast-forward two months later and the tomatoes are creeping all over the garden! I placed cages on 2-3 of the tomato plants but I didn't cage the cherry tomato one and now it's taking over the whole garden! 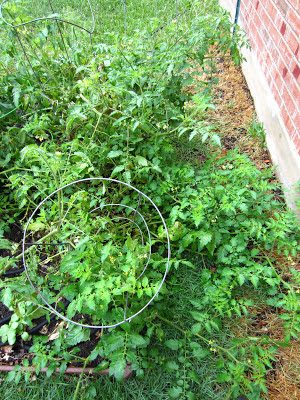 I tried to put some new cages in last week but this plant isn't playing by my rules. Some of the limbs will stay in the cage, the rest is just chilling on the grass.

But how cute are these little tomatoes?!?! I can't wait to eat them! 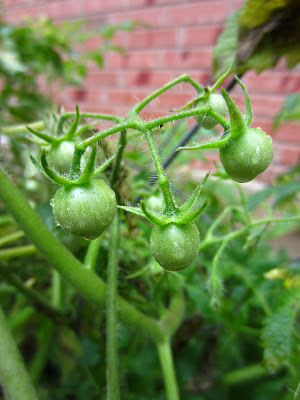 My Cherokee tomato plant is doing really well.
The tomatoes are forming and these two are the biggest ones of the bunch. I hope they're not going bad with those marks on them! I can't wait to see them turn purple! 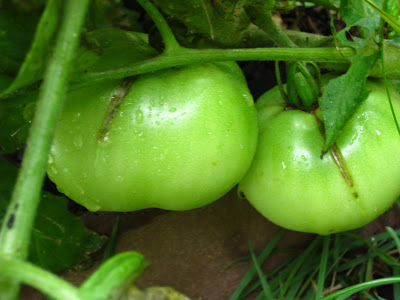 Here's hoping my tomatoes do well this season! I think I'm off to a better start than I was last season, for sure!

I also decided to pick up a couple of pepper plants at the garden sale and I currently have these babies forming: 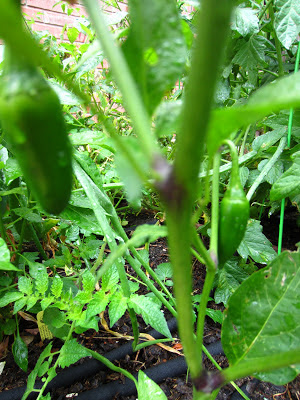 Thai Chili! I'm sure I'll be giving most of these peppers to my mom. 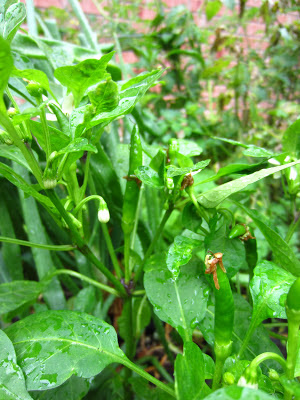 I'm also trying yellow squash again. Last year, I had tons of blossoms and a couple of actual formations, but then everything died. 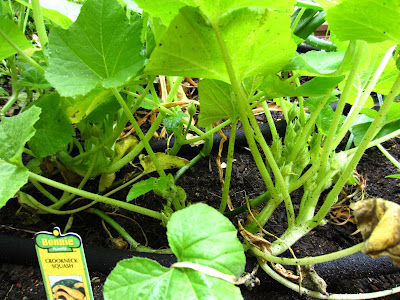 They seem to be growing well right now. Fingers crossed! 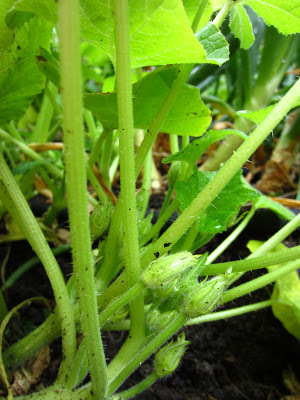 I have the following herbs growing: 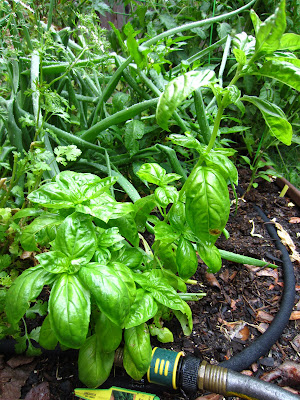 Cilantro (although it already decided to flower and try to go to seed) and flat-leaf parsley. 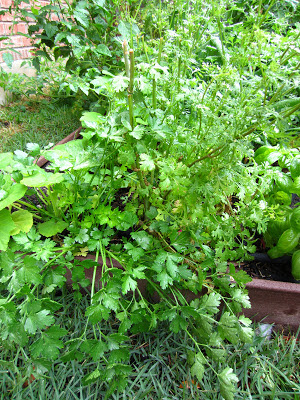 My green onions are still going strong. They're so big that they start sprawling too! I just trim what I need and I've given several whole bunches away to my neighbor but they're still taking up room! 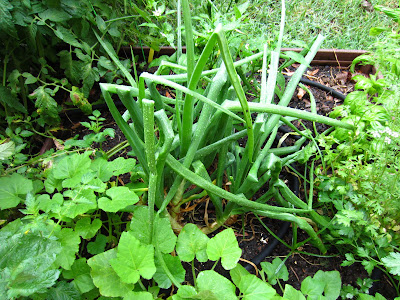 Here's hoping this season will be a fruitful one! What are you growing your garden??