I have a confession to make.

There, I said it. I know, how can I not LOVE Indian food?! I like everything! I've tried to explain it but I can't. I will eat it and enjoy it from time to time, but I won't go seeking it. I'm a weirdo.

On the flipside, Micah loves it.

Thankfully, there is a Masala Wok near us. It's a Chinese-Indian fusion place -- which placates both of us. He can have his Indian while I have a noodle dish (I can't help it, I crave noodles).

Because I'm such an awesome girlfriend -- oh, and the fact that today is Micah's BIRTHDAY! --  I decided to make chicken vindaloo (Micah's fave dish) as a pre-birthday dinner.

I used this recipe from the Food Network but subbed chicken for the beef and added tons of veggies. I thought the recipe was a good base but since Micah likes his vindaloo a tad bit more tomatoey, I think I will add some tomato paste next time.

For the wet masala: In a small skillet over medium-high heat, toast the cumin seeds, cinnamon bark, cloves, and peppercorns until fragrant, about 1 minute. Pour into a spice grinder and process until powdered. In a small food processor or blender, combine the toasted spice mix and the rest of the wet masala ingredients. Process until smooth. 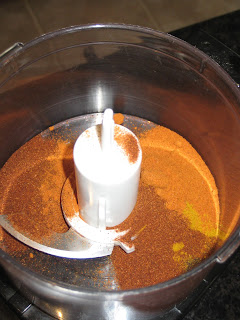 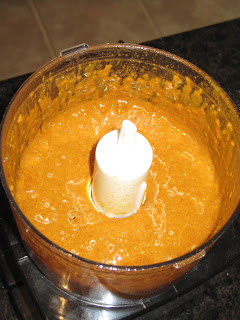 Place a large (preferably nonstick) pot over high heat and add the oil. When the oil is shimmering, add the onions and serrano pepper. Stirring frequently, saute the onions until golden brown, about 12 minutes. Don't let them burn! Turn the heat down to medium-high if they're starting to burn. 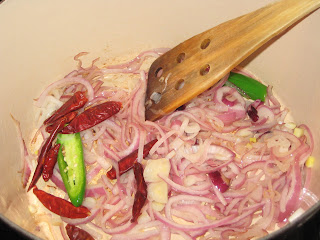 {red onions, serrano pepper, and I added some dried red chiles for a little extra heat}


Add the ground wet masala, taking care because it will sizzle wildly and steam up your glasses, if you wear them. Stir quite vigorously and turn down the heat if it's bubbling too furiously. Don't wash the food processor bowl yet. Keep stirring, with short pauses, until most of the liquid has evaporated and the masala comes together as one mass, about 2 minutes. Also, you may see little droplets of oil on the perimeter of the masala. That's a good sign! 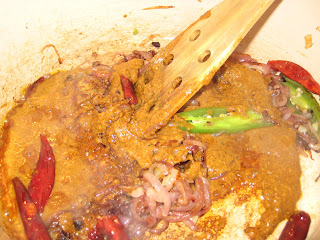 {your house will smell like this pot for a few days}


Quickly add the meat and stir, coating the meat in the masala. Stir and cook about 5 minutes until the meat browns. 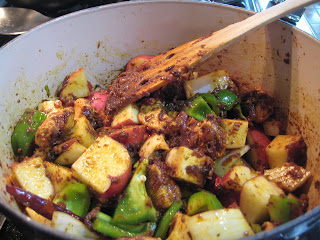 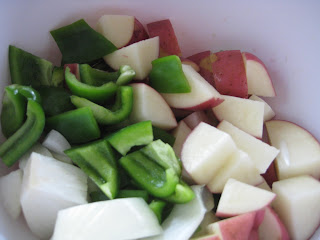 {I added 3 red potatoes, 1 bell pepper, 1/2 onion, and 1 diced tomato to the pot two minutes after I added the cubed chicken}


Remember that dirty food processor bowl? Fill it with 1 cup of hot water (from the tap is fine), swirl it around so it picks up any leftover masala, and pour that into the pot. Add salt and pepper, stir, bring the curry to a boil, and then turn it down to a simmer. Cover and cook 30 minutes. Then cook with the lid ajar for another 10 minutes to thicken the gravy slightly. Check the meat at the end of the cooking time; it should be tender and not chewy at all. Adjust the salt if you like, and serve over rice or with chapatis (whole wheat griddle bread). 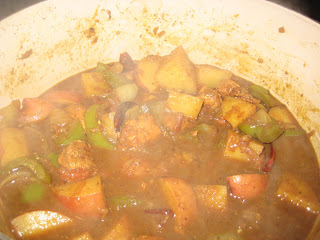 {hot and spicy! just the way Micah likes it!} 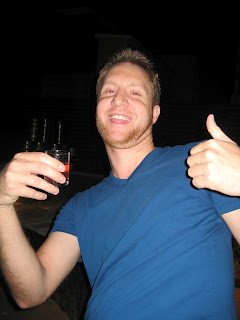