If you live in Texas, you know about kolaches. But do you know how that doughy, Czech goodness made its way to Central Texas? If you drive along Interstate 10 between Houston and San Antonio, you've seen the Czech influences there -- that's because several families settled there in the 1800s.

When the Czechs settled in Texas, they also immediately built beautiful churches for their communities. While they weren't huge churches, they were vibrant and unique. The ones that are still standing have been dubbed the Painted Churches of Fayette County. 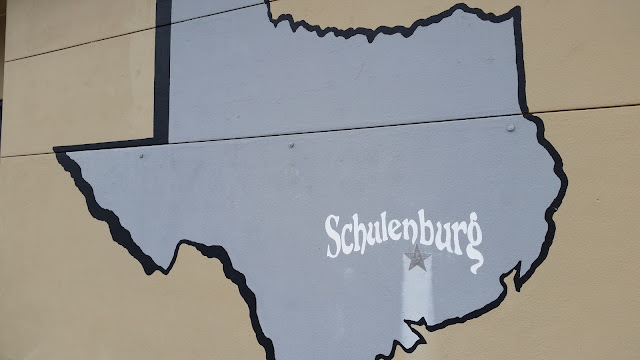 At the Schulenburg Chamber of Commerce, visitors can book a group tour or private tour. Or you can just pick up a map and do it on your own! On a Saturday in May, my friend and I decided to book a private tour (it's around $60 bucks + tip). Every tour starts at the Schulenburg Chamber of Commerce. Normally you drive your own car and the docent sits with you, but in our case, our docent (Linda) offered to drive her Audi SUV so we were all about that.

We visited four locations and it took about three hours. 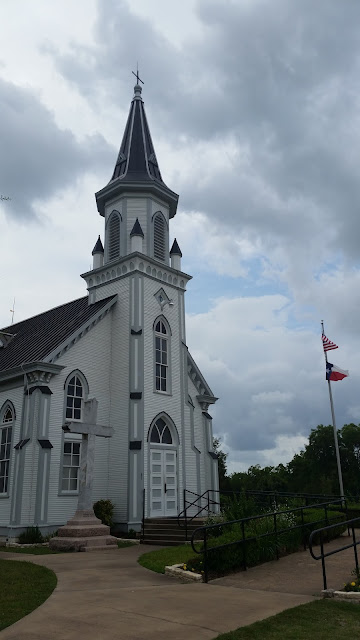 The church was originally built in 1876, but was destroyed by a 1909 hurricane. It was rebuilt in 1912 and been there ever since. Be prepared for the bluest church you've ever seen. 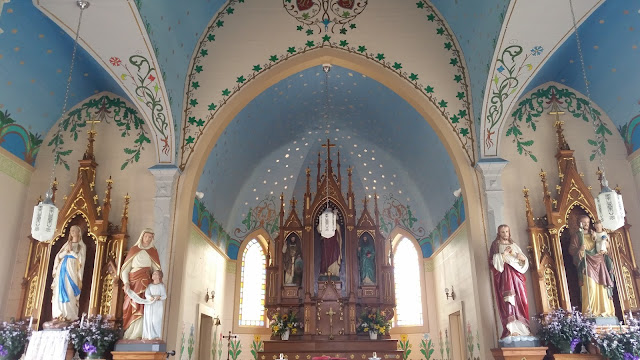 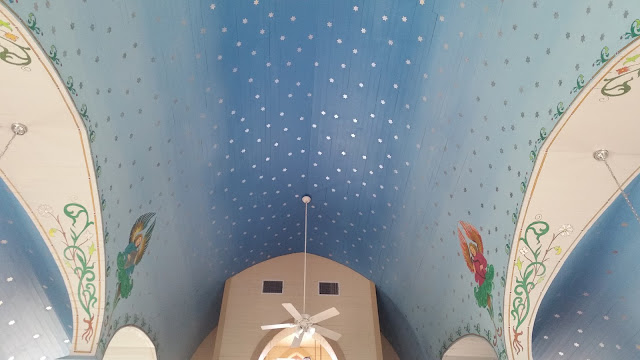 If I remember correctly, the community and parishoners painted the accents in the church after it was rebuilt in 1912. The colors just bring you in and make the space so enjoyable. 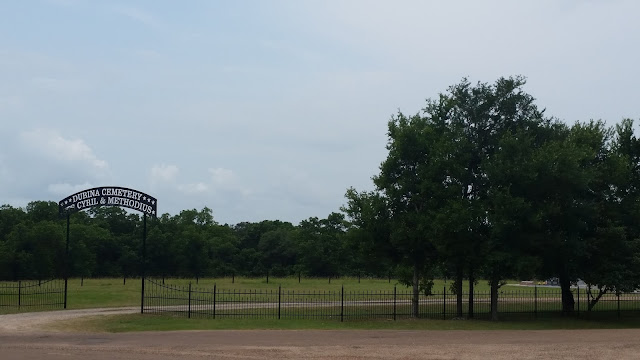 This is the most ornate out of the Painted Churches and it's more German. There are still services here and a lot of people have weddings here. 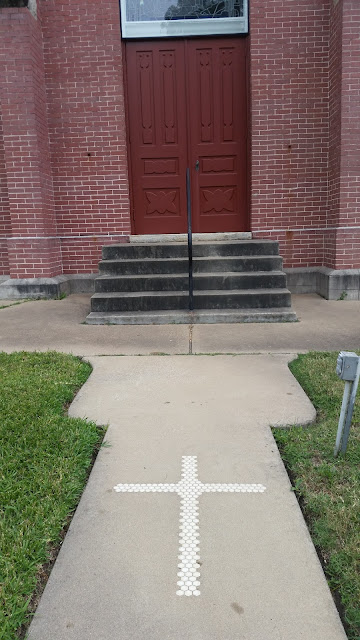 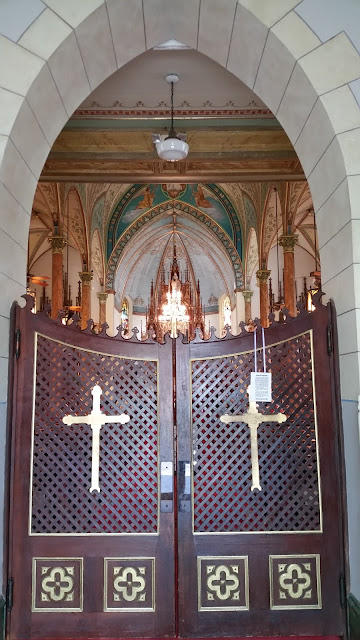 When you first walk in you're welcomed by these beautiful entry way. 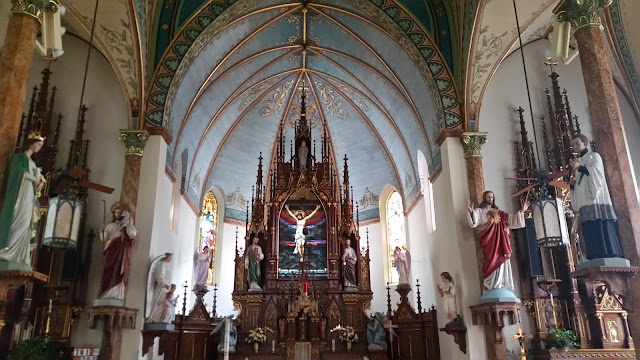 As you can see, there's a lot more gilded areas of this church than other churches you'll see. 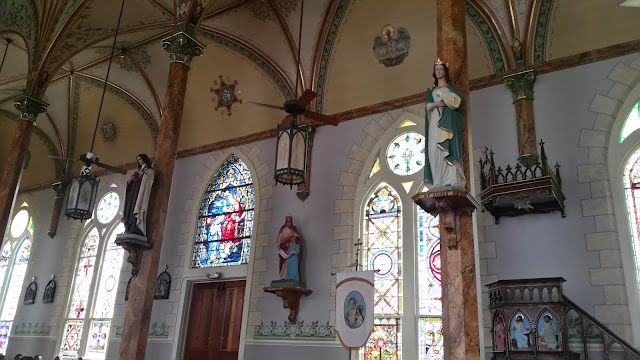 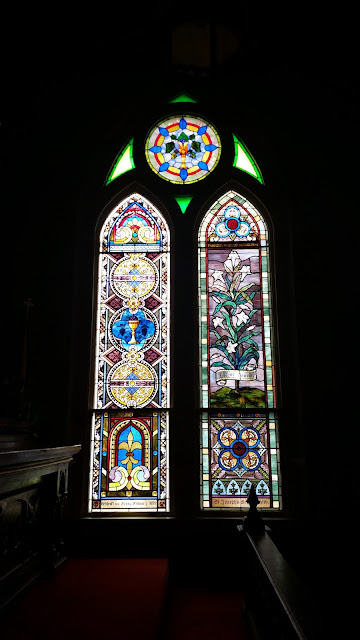 The stained glass were windows are masterpieces. They were made at factory in Berlin -- that factory was destroyed during World War II. 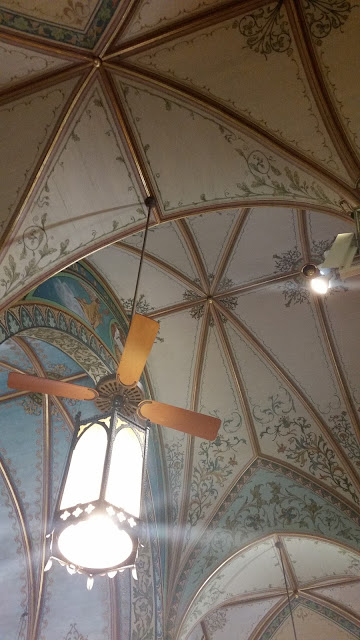 Even the ceiling fans are really pretty!

This church has a similar history as Dubina. Built in 1890. Destroyed by a hurricane in 1909 and the rebuilt. However, the church was also destroyed in a fire and then rebuilt again.

If pink is your color, this church will your favorite. 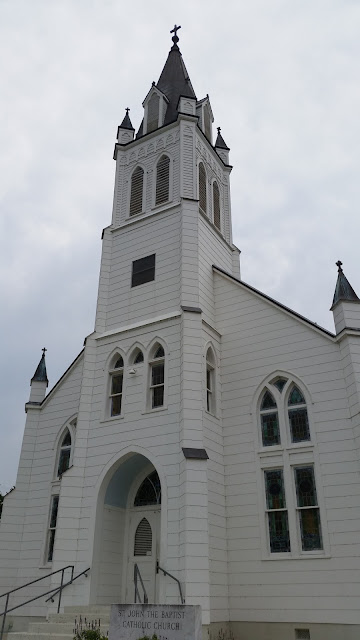 The grounds of the church are really pretty. There's a cemetery right next door and there is a good restroom you can use (important when you're on your third church). 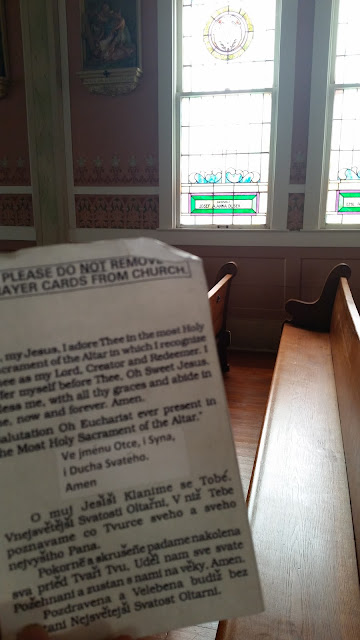 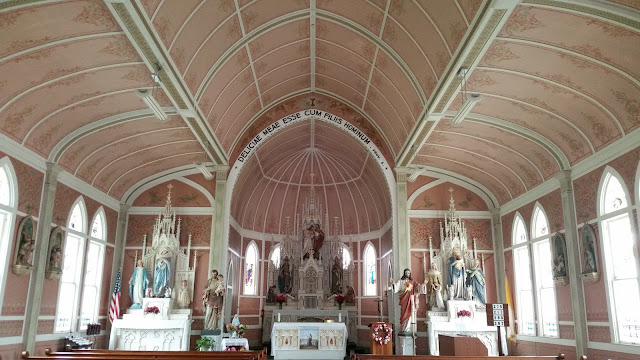 The pink has a dusty-rose hue. Muted but very pretty. The church is simple, has no a/c but they still have service--although not a huge congregation.

This is a shot facing the pulpit. 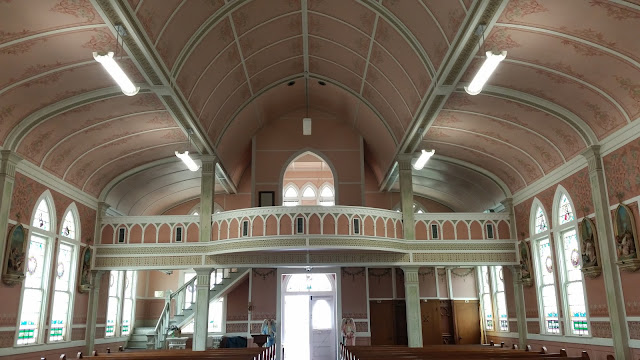 A look at the inside facing the entry way. 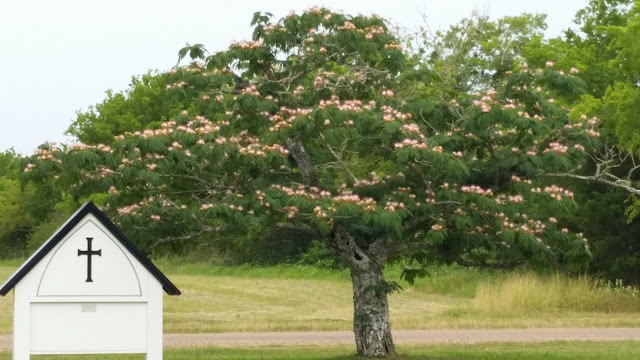 I just thought this small tree with pink flowers was just the perfect touch outside of the church.

This church still has a father that lives on site and they still see a large congregation every week. 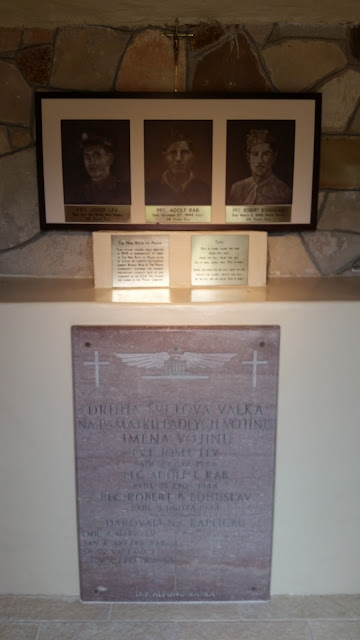 Did you know? Per capita, the town of Praha lost the most men to WWII than any other city. Nine men died in the span of 12 months. The town's Veterans Day festivities apparently draw a huge crowd. On the church grounds, there are three small stone shrines dedicated to the Praha Nine. 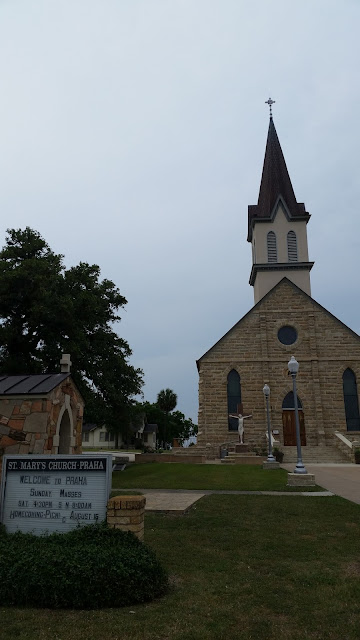 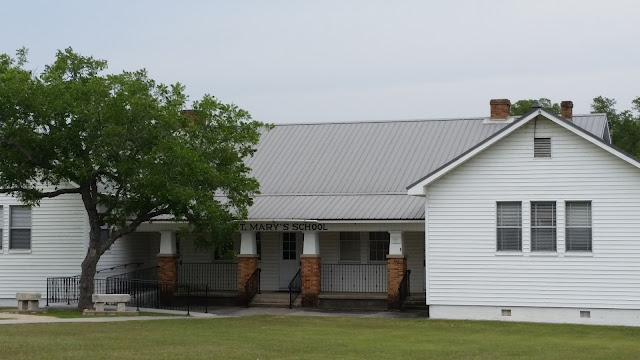 This was the old school house in town. 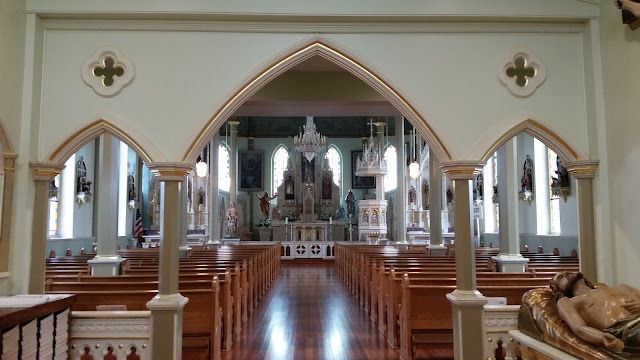 When we went in May, the church had just reopened after being closed for a major remodel. There were still minor things they needed to finish, but overall the remodeling was done to perfection.

Can you believe these wood floors were hidden under linoleum? I'm so glad they refinished them because the floors are gorgeous. 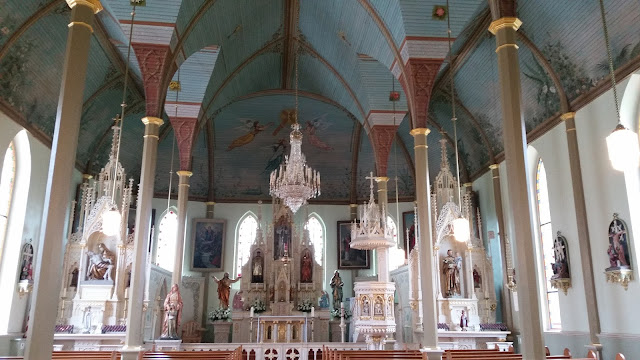 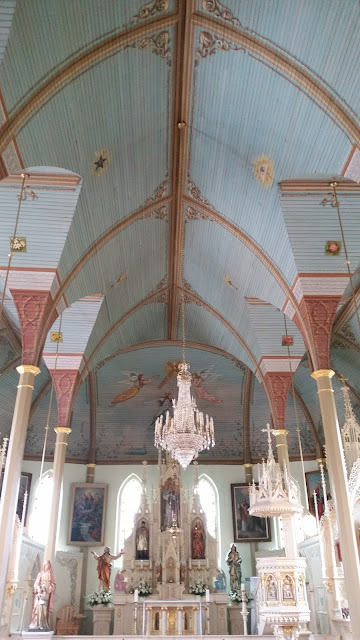 The roof is modeled after Noah's ark, if I'm remembering correctly. 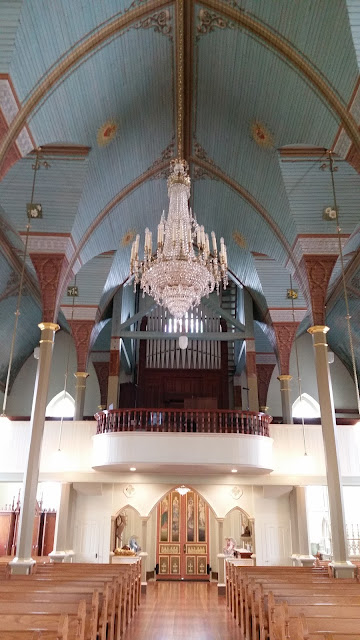 The organ area. This church does have air conditioning, which is nice during the heat of the summer! 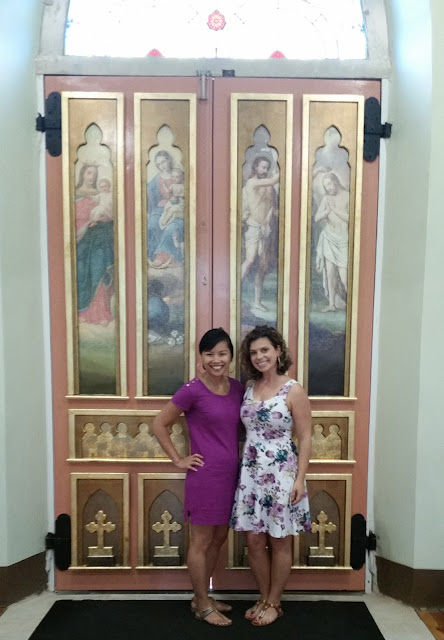 The new front entry doors that were recently installed.

My favorite church was probably Praha. It wasn't too ornate and had the prettiest touches.

After touring the churches, it was about time for a late lunch. We decided to make a full day in Schulenburg and decided to eat at The Garden Co. The restaurant has a garden store next door and adorable little shops. This place would be crazy business in Austin!

The food was good and it was a great place to chat about all the cool churches we saw. 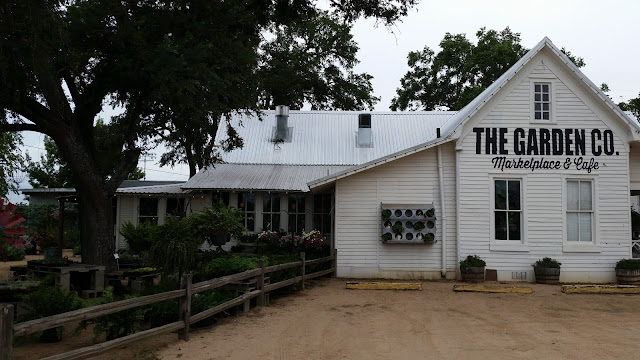 After lunch, we decided to check out a couple of wineries in the town of Moravia. I came across the fliers at the Chamber of Commerce and they were only a 15 minute drive away so onward we went. 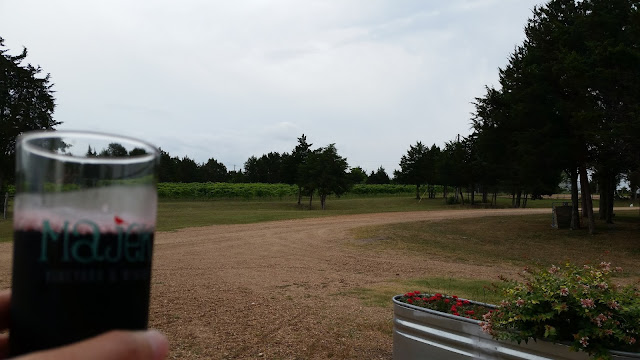 Our first winery was Majek Vineyard and Winery. Pronounced "my-yak" like kayak, the vineyard is owned and operated by a Czech family. All the land for the winery and nearby have been owned by the family since the 1800s. The owner of the vineyard is actually trying to acquire the rest of the parcels from the rest of his family so they can continue growing the vineyards.

When you pull up, this joint just screams cute. The tasting room is simple yet inviting. The tasting was $5-$10 for 5-6 samples. While their wines are a bit sweeter, my friend and I both got a full glass of their original Black Spanish Lenoir. It had a slightly acidic quality that we both liked.

After Majek, we drove down the hill to Moravia Vineyard and Winery.  This place is legit Italian and is run by an Italian transplant who actually lives in Katy but comes in every weekend to run the vineyard.

All the tastings here are free. My friend and I chose a cozy sofa setup and settled in for the tastings. The owners even give you a little small plate of nuts and cheese for your tasting. While we didn't love any of their reds, the blanc du bois was perfectly refreshing and balanced.

After the wineries, we were on our way out of Moravia when we decided to make a pit stop at the general country store down the street where we proceeded to crash a 50th birthday party.

The general store is what I think of in my head of old honky tonks. There was a dance floor, a bar teaming with locals and country music blasting in the background. It was great. The people who were their for the birthday party pretty much all had Czech ties -- it was really fun chatting with them about their time in the Moravia area.

It was the perfect night cap to our lovely day in the Schulenburg area! 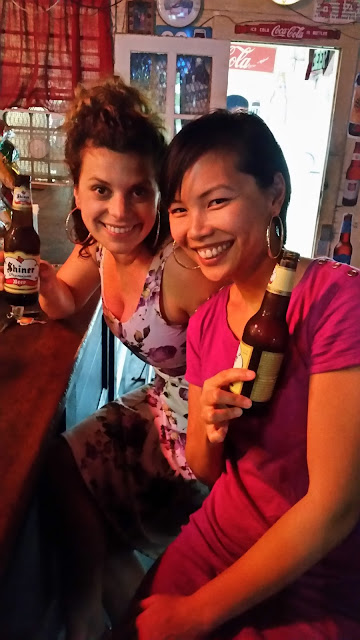 I highly suggest you visit the Painted Churches and Schulenburg! It's the perfect day trip from Austin, San Antonio or Houston!