My Chickens Bring All the Boys to the Yard

Last I left you guys, we were deciding what kind of chickens to get. Micah said, "If we're going to have chickens, they're going to be cool chickens."

With that in mind, I went to good old Craigslist and came across some Polish chickens. I was immediately smitten by their bouffant! I mean, it's absolutely ridiculous!

While they're not prolific egg layers, they are fun to look at. I found a lady in Leander who had several Polish hens to choose from and we settled on these two ladies. 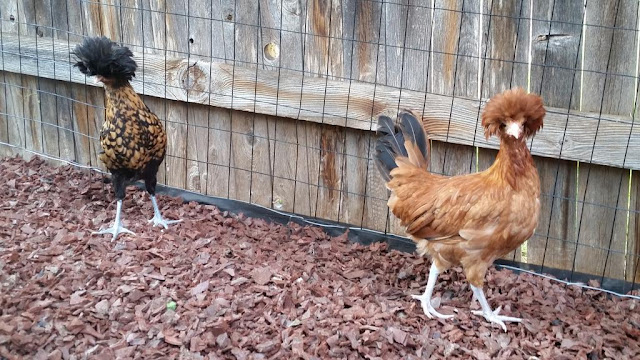 We got them in early May and they were about 2.5 months old. They were rambunctious and the golden laced one (black top) was feisty and wanted to get out immediately. Don't they kind of resemble Big Bird?

By June, the hens were getting a lot bigger. They started digging around the roosting box more so I figured they were going to start laying eggs within the next few weeks. 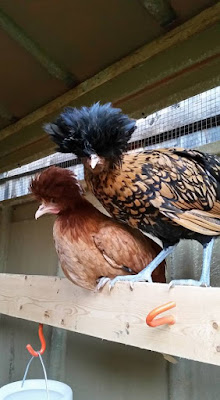 But an unfortunate thing happened in mid-June. While out at dinner, we let the dogs out in the backyard for a few hours and when Micah came home, he was greeted with nothing but feathers in the yard.

Our dogs had slaughtered the hens.

I'll spare you the gory details; but while the black chicken's carcass was found, the red one was nowhere to be found. Spark's (our corgi) belly on the other hand, was 3x it's regular size! That's where the red chick went. [cue sad face].

We think our dogs managed to push the gate in far enough to where the chickens got scared and made a run for it.

Both dogs slept outside that night. Even with her bloated tummy, Spark was probably the happiest Corgi in the whole wide world.

After recuperating from the loss, Micah found a woman a few days ago who had numerous Polish hens to choose from. Micah was a trooper and picked these hens out (he said her backyard had 100 chickens and reeked!).

This time, we got three hens. These fellas are bit younger than the ones we originally got, but they're still funny as hell. 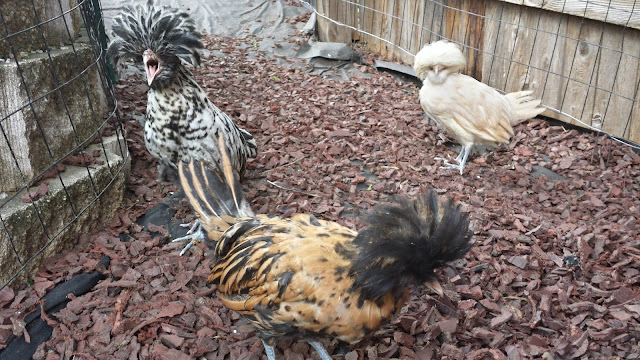 There's a silver laced, gold laced (middle) and buff laced (white one). They were pretty timid when we first got them and they don't mind being handled at all, unlike our last two. Apparently these are "show" chickens because theire bouffant is larger than normal... which means I can barely see their eyes! IT CRACKS ME UP! 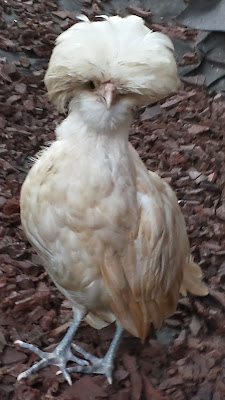 To deter the dogs from ever feasting on our chickens again, we are trying to train them with a shock collar perimeter. We hope to only use it a few times before they learn not to go anywhere near the coop.