Pho For a Crowd: Dinner Party For Two Dozen People

Over the past few months, we've had half-a-dozen winter storms" in Austin. What city am I living in? I only like one ice storm every five years, please. When it's cold, it's only appropriate to warm up with a hot bowl of pho!

I had my annual pho party a few weeks ago and the only proof of said party is this one picture that a friend took of me! 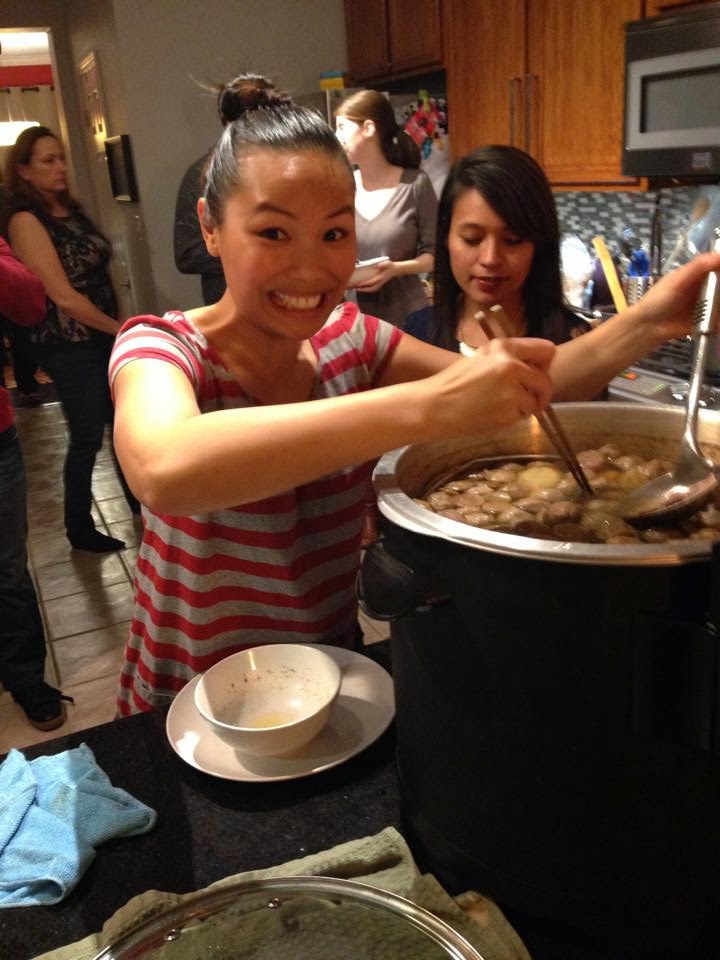 In the midst of prepping noodles for my guests, I completely forgot to take pictures of the appetizers.

I made three dozen banh pate chaud and rolled nearly 60 tofu spring rolls! To give myself some time, I premade the pate chauds the week before, froze them and baked them the night of the party.

I'm still using the same electric fryer to make my broth. For this 5 gallon container, I used 13 pounds of beef bones and another 3 pounds of short rib bone. I got the short ribs from the Korean grocery store and it definitely made the broth richer and sweeter. I started the broth at 10 a.m. and dinner was served around 7 p.m.

My original pho recipe (on a smaller scale) can be found here.

What was my biggest hiccup of the night? Hungry people waiting for their bowl of pho! Even though I had plenty of appetizers and there were plenty of drinks to go around, most of the two dozen guests descended around the same time. I left the invite dinner time open-ended so I was hoping for staggered guests but hungry bellies prevailed.

I started an assembly line to cook the noodles and then the guests chose their cuts of meat and filled their own bowls with the broth. We had two tables set-up with pho accoutrements, chopsticks and soup spoons.

Even though it was a busy night, it all worked out great in the end and Micah and I had a fabulous time chatting, dining and drinking with friends.